Aiding the Digital Transformation of Telco

A study across 140 OpCos covering 2.5 Billion subscribers and $625 Billion of revenues, reported by Roland Berger shows that 9-10% of Telco revenues come from adjacencies and new services. By 2025 this is estimated to be 22% globally, ranging from 11% in Europe to 33% in North America. The major ones among these adjacencies and new services are IoT and Mobile Financial Services, which are considered ‘Very Near’ to Telcos’ core services. Among other adjacencies, Security and Analytics are sufficiently ‘Near’ for Telco and e-Commerce, Digital Advertising and Media & Entertainment are further away from core services and Retail Banking the furthest.

A Telco can imbibe the adjacencies and new services to varying degrees depending on the scope exercised by the Telco with respect to each service. A Telco can exercise the following six distinct, but overlapping, scope items with respect to any service. And for exercising any scope, especially for adjacent and new services, Telco needs to make investments in their network infrastructure, information technology, and business processes.

Access: This is the least of the scope exercised by the Telco and an example is of OTT services, where the Telco merely extends the access as a rather dumb pipe. The investments needed for this were faster and cheaper data networks (3G, 4G and 5G).

Discovery: The second degree of scope wherein the Telco facilitates the discovery of the service by the consumer. On-deck services through co-branding and joint marketing are examples of this.

Commerce: The third degree of scope where the Telco assumes the retailing of the service. Telco has been doing this for a long time for devices and traditional value-added services in addition to core services.

Fulfillment: The fourth degree of scope where the Telco also fulfills the service. Traditionally this has been done for devices by many Telcos and more recently for Media & Entertainment Services through not only faster backbones but CDNs, Edge hosting, Streaming technology, Rights management, etc. MTN Shortz is an example where MTN exercises all four degrees of scope. 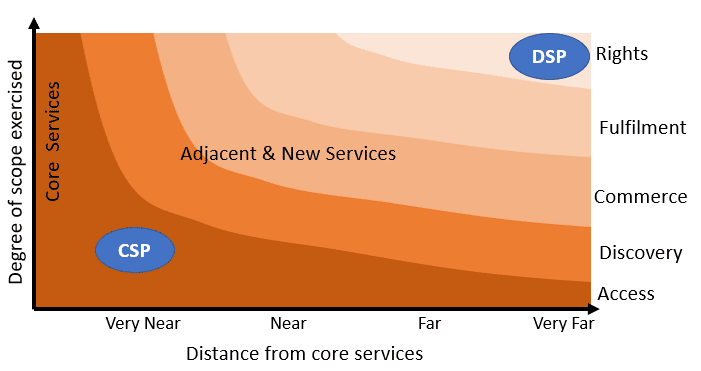 A CSP that provides core Telco services is at the bottom left of the picture and the top right is a full-fledged DSP (digital service provider). Digital transformation takes the Telco on a journey from CSP towards DSP through a path that is appropriate for that Telco. Which ever be the path taken by a Telco for each of the adjacent and new services, it invariably goes through Discovery and Commerce as the first two steps.

The business focus of the Telco while exercising Discovery and Commerce scope with any service is to up sell and cross sell the adjacent or new service to its customers. This trend of generating revenues from adjacent and new services – indeed is the primary reason for a Telco to set on a journey from a CSP to a DSP. And the degree of success achieved in penetrating these services to their subscriber base underlines the business case for the Telco to exercise additional scope of Fulfilment and even Rights Ownership for that service.

Flytxt through its Intelligent Customer Engagement product suite is focused on enabling a Telco to leverage AI, advanced analytics and marketing automation to profitably and quickly up sell and cross sell core services and these new and adjacent services to the Telco’s subscriber base. Flytxt’s products and solutions are designed to seamlessly work with any standard and custom solutions used by Telco for managing the adjacent or new services.